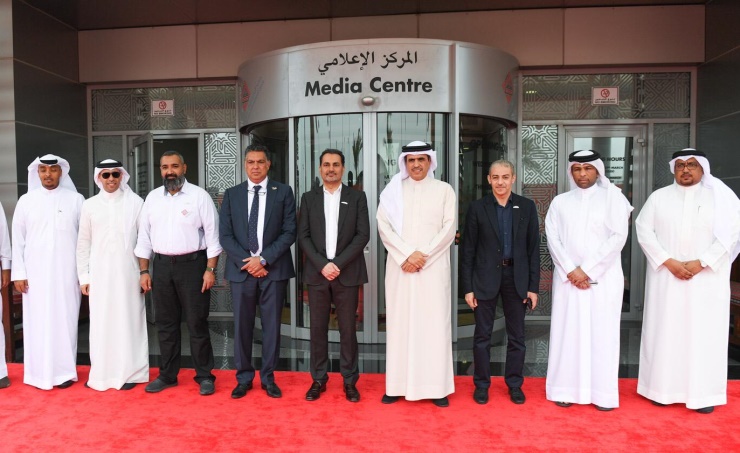 Manama, Mar. 19 : Information Affairs Minister Ali bin Mohammed Al Rumaihi commended the Bahrain International Circuit (BIC) – the home of motorsports in the Middle East – hosting the Formula One championships over fifteen years thanks to the Kingdom’s most advanced organizational, logistic, security and media services, and the presence of 1,200 Bahraini volunteers’ team on the ground to welcome and serve the Guests of Bahrain.

The minister affirmed that Bahrain continues to reap the fruits of this leading project under the patronage and follow up of His Royal Highness Prince Salman bin Hamad Al Khalifa, Crown Prince, Deputy Supreme Commander and First Deputy Prime Minister, affirming the project’s positive results in the aviation, transportation, hotel and restaurant, and commercial boom as well as the BIC’s contribution in boosting the Kingdom’s developmental accomplishments in the prosperous era of His Majesty King Hamad bin Isa Al Khalifa.

This came as the minister visited the Bahrain International Circuit today to follow-up the Media Centre and Radio Studio preparations and arrangements. He expressed his pride in the ministry’s cooperation with the BIC and the respective governmental agencies in the provision of the requisite technical, technological and media services and facilities for use of local and foreign media correspondents in order to showcase this world-class sports event and to transmit the associated festive atmospheres amidst largest gathering of fans and spectators.

Al Rumaihi stressed the Information Affairs Ministry’s keenness to provide comprehensive and distinctive media coverage for the Bahrain Gulf Air GP for Formula One race, depicting the entertainment programmes and parades inside the circuit, via holding live radio interviews with officials and the public from the heart of action in the BIC.

The minister pointed out that the successful Bahrain Grand Prix for Formula One in previous years have turned the limelight of the world onto the Kingdom of Bahrain and boosted its diversified accomplishments as well as its presence in the world map of sports, tourism, and the media. The BIC proved its competitive edge with international circuits in terms of good organising and hosting.

The BIC has already won the best organiser award from the International Automobile Federation (FIA).