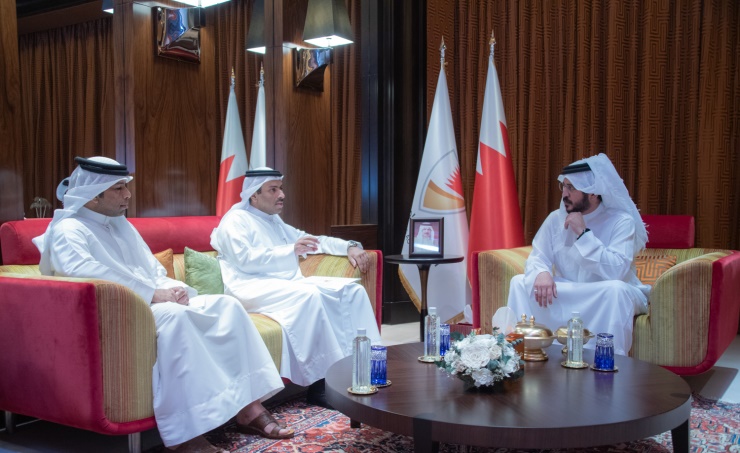 First Deputy Chairman of the Supreme Council for Youth and Sports, General Sports Authority (GSA) Chairman and Bahrain Olympic Committee President, His Highness Shaikh Khalid bin Hamad Al Khalifa, has affirmed that the media is an essential partner in ensuring the success of sports work, which contributes to attaining more achievements in such a vital sector.

HH Shaikh Khalid congratulated the Information Affairs Minister on the precious royal trust bestowed upon him by appointing him to his post, wishing him and all the affiliates of the Information Ministry continued success.

HH Shaikh Khalid bin Hamad reviewed the plans and programmes that the General Sports Authority seeks to implement within its development vision, in a way that would achieve His Majesty King Hamad bin Isa Al Khalifa’s visions and directives to continue developing the sports movement by implementing the development projects included in the action plan of the government, led by His Royal Highness Prince Salman bin Hamad Al Khalifa, the Crown Prince and Prime Minister.

His Highness underlined the pivotal role played by the Information Affairs Ministry in highlighting the efforts of various governmental sectors, institutions and entities, which will motivate them to carry on their comprehensive development endeavours.

HH Shaikh Khalid indicated that the sports media is an integral part of the sports work system, noting that its efforts contribute to enhancing progress and highlighting achievements.

His Highness gave directives to the Information Minister to devise a plan to develop sports media, in line with the General Sports Authority’s goals aimed at boosting the sports sector to achieve more progress.

HH Shaikh Khalid stressed the need to strengthen cooperation with all sports authorities to determine sports events and coordinate in their coverage, which will ensure that they are covered in a manner that contributes to increasing the successes of the sports sector.